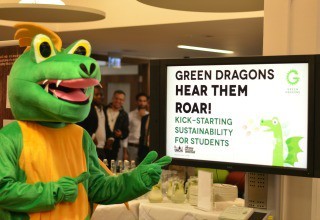 At the launch event for Green Dragons at City University London Students’ Union, attendees were treated to an early glimpse of the pioneering, student-led environmental solutions which the project will generate.

Green Dragons is preparing to launch an innovative platform for galvanising widespread student support for sustainability action. Building on the successful Kickstarter model, students will use an online platform to pitch their ideas for greening projects. But rather than pledging money, successful ideas will be supported by students pledging things like volunteering hours, outreach work, and behavioural change promises.

During the launch evening, student Hamish Haghayegh explored the idea of hydroponics being a way to combine food security issues with international development.

Hamish talked us through his belief that hydroponics can tackle the three issues of soil infertility, mass unemployment, and water scarcity – hoping to fund a means of food production which relied on beds of water rather than soil, using 90% less water than conventional agriculture and allowing crops to be grown in any climate.

"Hydroponics has massive potential", Hamish told us. "From being used in the middle of the desert for growing tomatoes, to being used by NASA in space to potentially feed new colonies outside of this world, there are many exciting ways in which it is being used. With our project, we hope to allow people in areas where the soil is infertile to grow crops efficiently, while also learning business and entrepreneurial skills"

Hamish hopes to partner with SURF in Rwanda if his project is successful, meaning that the idea could also strengthen international development links championed by NUS’ ethical and environmental strategy. Furthermore, these sparks of pioneering innovation and creative thinking are attracting new students to the sustainability agenda.

"I have never been involved in sustainability before, and few of the HydroFarm team members have", admits Hamish. "Sustainability is such an important aspect to any project or business venture in the world these days, and we were all very keen to dive in with the project and get some experience while benefiting other people across the world"

City University London Students’ Union president Giulio Folino was joined by Emily Thornberry MP to listen to pitches like Hamish's, celebrating student-led innovation in working towards crucial environmental solutions. “For a university like this, in a central place like Islington, to be able to take a leadership role on this is great”, Emily asserted.

"Students' Green Fund is an incredible model for leading students to step out of their comfort zones and experiment with sustainable projects", Hamish concluded. "Many students have a genuine interest in launching their own projects but lack guidance and support. With Students' Green Fund, not only can students be motivated to launch their own exciting projects, but they can rest assured that there will be talented people supporting them through every step of the process"