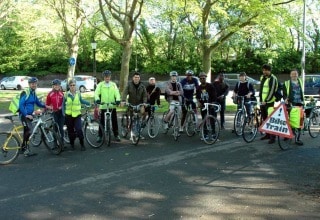 The University of Brighton is spread out across three campuses. Obviously, this makes it difficult for students to get around, and can make it feel like the institution is fragmented.

Thanks to Students’ Green Fund, the University of Brighton Students’ Union has launched a brand new bike co-op, bringing the campuses closer together.

Not only does this make connections between the three campuses easier and more viable, it promotes a strong sense of health and wellbeing among staff and students, along with greener transport links.

“The Brighton bicycle co-op is a student led initiative where one can bring your bike to get it fixed, get new parts, learn about bicycle maintenance, socialise and rent a bike” explains project coordinator Bruno De Oliveria.

“It is open to students, academics and to the community”, he continued.

“There was a sense of reclaiming the roads from the monopoly of car”, Bruno remembers. “At the end of the journey there was a bike Dr waiting to sharpen up those bikes and a snack waiting for those who completed the ride”

The ride was led by the local campaign group Bike Train, who lobby for cleaner air in the community, recently securing wider bike lanes in the Lewes area. Holding events and bike rides right across the local community, it’s the perfect example of Students’ Green Fund’s ability to create new partnerships between students’ unions and local campaigning groups.

We talk a lot about Students’ Green Fund putting sustainability at the heart of higher education, but this bike co-op at the University of Brighton is literally at the centre of the institution’s three campuses. It brings staff and students together through greener transport links, healthier lifestyles, and stronger communities.

As with so many other examples from Students’ Green Fund projects, the Brighton bike co-op is a wonderful example of sustainable living offering a range of other benefits to staff, students and the local community.