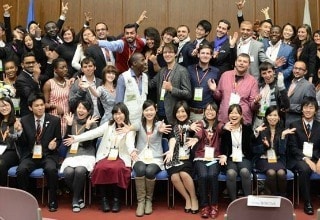 Last month, UNESCO hosted their annual conference on education for sustainable development. Anna-Marie Vickerstaff of Leeds Green Exchange guest blogs about her experience of the event.

At the start of the summer, I opened my inbox to a an invitation from Goi Peace foundation and UNESCO, to represent the UK youth as a young leader in Education for Sustainable Development at the Youth and World Conferences in Japan. I was absolutely delighted, albeit marginally terrified, to have been selected from more than 5000 applications from 180 countries to join a team of 51 other youth leaders.

We were tasked with forming strategic recommendations on empowering youth to lead on ESD across the globe to feed in the UNESCO Global Action Plan for the next ten years. No pressure then.

The Youth Conference took place in beautiful Okayama and was alive with the innovation and creativity of such diverse and enthused delegates. We brought experiences of learning and teaching from Pakistan to Palestine and from Honduras to Fiji. Irina Bokova, director-general of UNESCO, led the proceedings, imploring the global youth “not to wait for us” and to keep on leading with the revolutionary and holistic projects we are undertaking. With that in mind, we formed groups relating to our interests and expertise and, fuelled by a lot of sushi, created three recommendations on topics ranging from policy advancement and institutional approaches to women and marginalised groups. Read our statement and vision for a sustainable future here.

The general consensus of the group after the youth conference was one of empowerment. We didn’t for one second think that we had ‘cracked’ how to achieve a sustainable future, and managed to restrain ourselves from sending messages to Greenpeace or Al Gore telling them pack up and go home as we had the whole Climate Change thing sussed. As a unit of global youth, however, we did feel that we had created something of use to take forward to the World Conference in Nagoya and to feed into the development of the Global Action Plan on ESD.

The question was whether anyone was going to listen to us and whether we could truly have an impact.

Entering the world conference was entirely overwhelming. Nagoya congress centre towers over the city like a dystopian ministry, and inside esteemed delegates were huddled together like penguins. Luckily, the discussions were geared towards a utopian future rather than an apocalyptic one, and the delegates were working out how to keep the planet cool instead of warming it up.

On the first morning, we heard from Ministers from across the world; from Irina Bokova; and Ban Ki-Moon. We felt inspired to get going and take action, but as a group we quickly became frustrated. Many of the side discussions were sharing amazing ideas and initiatives from across the globe, but nobody was making any commitments or future plans. What’s more, the youth at the conference were not being given a platform to convey the amazing work that they had been doing or to formally present our statement.

There were plenty of discussions going on, but we wanted to see action.

Another delegate and I took it upon ourselves to set up our own impromptu workshop to present the recommendations. With less than 24 hours of planning, and no official promotion, we gained attendance from around 100 participants, with more people outside the room who couldn’t fit in. Many described the workshop as one of the most inspirational and motivational that they had attended at the conference. With as US delegate noting that "it's a powerful, well organized, and inspiring statement that conveys a sense of hope and commitment for making a better world. It was great to be able to engage in dialogue with all of you on it this afternoon. Thanks to all the youth for showing such outstanding leadership."

During the workshop we called on direct commitments and actions towards supporting ESD initiatives led by the UNESCO Youth Delegates in their regions. We had direct and personal commitments from delegates ranging from US students, to the Education Minister for Tanzania and from the World Heritage Youth Education Centre, China to UN consultants.  Each of these delegates stood up in front of the group and committed to taking ESD forward in their own unique way.

One of the most significant commitments came from the Swedish delegation, who went on to make an official statement to UNESCO that as direct a result of our workshop, they believed the youth delegates and youth conference should be more formally integrated at the next UNESCO conference.

The ESD youth group are not stopping here. We are staying connected and planning new campaigns and projects in the build up to COP21. We are taking Irinia Bokova’s words to heart, and we are not waiting for governments and institutions to catch up. We are moving towards sustainable education in formal, informal and non-formal environments. We are striving for an emphasis on adapting to, as well as educating on; Climate Change, and embracing the creative arts as a fountain of innovative solutions and inspiration for the next generation of youth leaders.

What we do know, however, is that the global youth cannot do it alone. We need to strive together with policy makers, institutions and community groups with our head, hearts and hands working towards a sustainable future.

The 52 youth delegates who attended the conferences in Nagoya have not been through a ‘sustainable’ education system and have still achieved amazing things. From researching as a biomimic in Bahrain to community education in Fiji, the delegates I worked with are truly inspirational. If we combine efforts now and form a more sustainable education system for every member of the next generation of youth, just imagine what those graduates would be capable of.

Now is the time for action. The youth are ready, and we hope you will come with us.